So you want to know about Las Vegas. You mean the city that has absolutely no hotels, restaurants, or casinos? Hahaha. Well of course you know I’m kidding, because when it comes to Las Vegas, we have all of these things and then some. And some of the best entertainment in the world. But where are some of the real gems in Las Vegas found? Some are actually found outside of the strip. Although 99.9% of all people visiting Las Vegas come to stay on the strip, we actually want to show you where the locals go.

In fact, we even want to show the locals where the locals go. This is basically a simple guide of a few basic necessities for locals and tourists. The best part about it is that we actually asked and reviewed locals in order to get their opinion. Now I know if you’re looking for a hotel or a restaurant it’s quite simple to go on line and literally read thousands and thousands of reviews on thousands of websites telling you exactly where to go. But what if you want an auto mechanic, a physical therapist, a real estate agent, or even a hiking trail. Well you come to the right spot. So let’s begin…

Now of course the saying goes, “all I need is a good mechanic and a good attorney and I’m set.” Well we have an absolute gem for you. JCJ Auto Repair is by far one of the best mechanics on the planet in my opinion and one of the nicest people you’ll ever meet. The owner and mechanic’s name is Charlie. Now this isn’t something we just came across and looked online to find. We actually asked a few people from the Las Vegas area, and this is the mechanic they recommended. But what made the biggest impression on us was that one of their returning customers actually lives in Los Angeles, CA. He actually drives his car from Los Angeles to Las Vegas in order to have his car serviced. Now for those of you don’t know, that’s approximately a 280 mile drive, one-way and crossing into another state. Now, we figured either this person is crazy, or the mechanic is really that good. The consensus? The mechanic is really that good. Overall amazing quality, customer service, and price.

“It is hard to find honest mechanics in town. Dealer gave me a $2700 repair bill. Since it seemed too high I went to these guys and they told me all I had to do was to clean the terminals and the connections around the battery. 1 hour labor versus what the dealer quoted me to replace the whole electrical harness…”

“Other time I had my engine mounts replaced. After I agreed to pay to replace 4 engine mounts they called me to bring less money since they had to replace only two. I would have never known if all four was replaced to just two. They have competitive price ( less than dealer) and always do excellent job. They also don’t upsell repair your car doesn’t need. I have been a returning customer for 10+ years. Thank you JCJ !!!” ~ Zoltan Zoldi 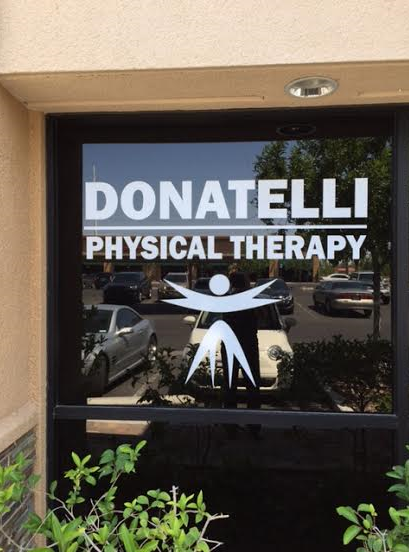 Now in this case, I actually consulted a good friend of mine, who knows about physical therapists, due to the fact that he’s used them quite a bit. He’s a professional performing dancer who is currently performing in the Los Angeles area. He had heard about a therapist in Las Vegas and actually drove down for the day just to see him. After being told that he would have to remain on crutches for an additional three months, and it might take him a year or more to possibly run again. This of course coming from two well-known doctors in the LA area. He met with Robert A. Donatelli, PT of Modern Athletic Science in Vegas, was walking crutch free on day 1 and back to performing within three weeks. Now he is currently training for an Ironman. There’s not really much more to say after that. This story actually made me a believer. But don’t take my friend’s word for it, just look at what others are saying:

“Doctor Bob and Georgie are the walking living examples of care for the patient. Highly educated, experienced and knowledgeable they are the best kept secret of the medical industry in Las Vegas. Very professional and courteous they help their patients get better by taking the time to listen and to tailor the therapy according to each individual’s needs and abilities. Bob and Georgie are doing more than just help heal injuries they truly change people’s lives.” ~ Igor Krezo 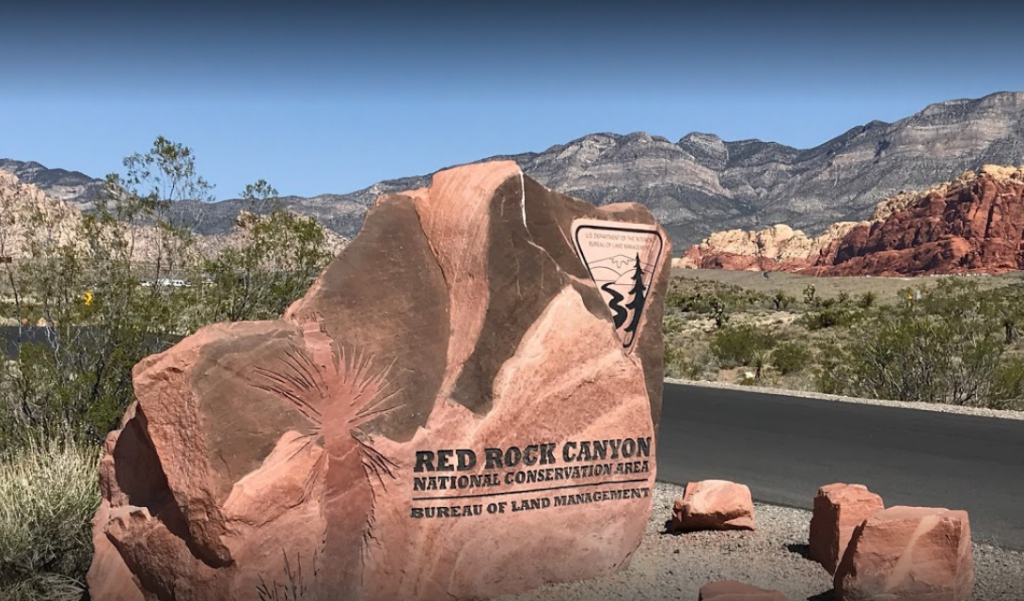 Now this may or may not be a hidden gem, but it’s an absolute beauty of a trail. Red Rock Canyon National Conservation Area. Most everyone I spoke with who’s an outdoor type person, can’t stop raving about this place. It’s a 13 mile scenic drive with some of the most amazing rock formations you’ll ever see. And there is a paved road to either drive through or ride your road bike on. If you dig a little deeper off the paved road, you’ll find countless trails for mountain biking and hiking, climbing, camping, off-road driving, even photography. Only 16 miles from downtown Las Vegas and 2 miles from the Red Rock Casino and Resort, this is a definite must see and experience at least once.

Some of the Best Restaurants in Las Vegas

Did we mention we also have restaurants here? Hahaha. Did you honestly think we’d leave out restaurants? But these are definitely three restaurants, mentioned and highly recommended to us by the locals, which you would not see advertised in most publications that constantly push the high-end casinos and strip eateries. So let’s dive in:

So this next restaurant came highly recommended from many of the patrons who eat their regularly. But the highest recommendation and/or complement came from a Greek person who stated to me that you can’t find traditional good Greek food really anywhere in the West Coast. Maybe someone in the East, but still nothing even comes close to the food you’ll get in Greece. Except for this place. He told me that this place could hold its own even in Greece. He made it very clear to me that many, many people eat out in Greece and that if you don’t serve quality food in Greece, you’ll be out of business in weeks. So what’s this place called? It’s called Elia. Actually the full name is Elia Authentic Greek Taverna. And based on its over 100 Google reviews with a 4.8 star average, I would say it’s a definite go to place to get your Greek on. Definitely try the octopus, the spicy feta dip, and the fried zucchini. However, everything on the menu is to die for.

How About Italian Food 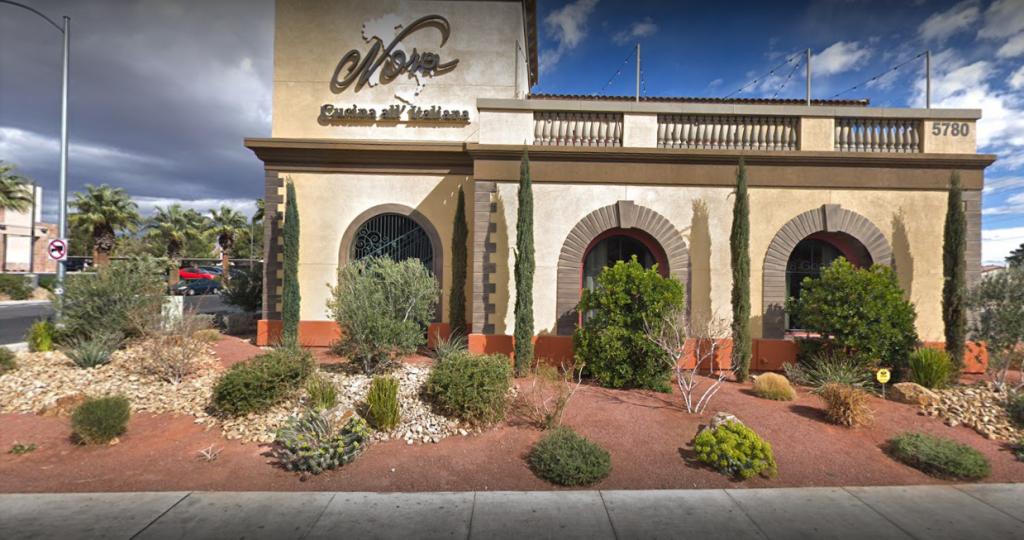 I don’t go out and eat Italian much, but when I do it’s always this place. First time I came here was with a friend who’s good friend’s of this family owned the place. We may have gone the first time to support our friend’s restaurant, but after trying the food, you can tell it was something special. The place is Nora’s Italian Cuisine they have been in Vegas since 1991. My favorite of course is gnocchi and the antipasto salad. But let’s get one thing straight with this place – You can’t go wrong! Another great place where people drive from Los Angeles just to have lunch or dinner here, and then drive back. They have over 1,261 reviews with a 4.5 star rating! 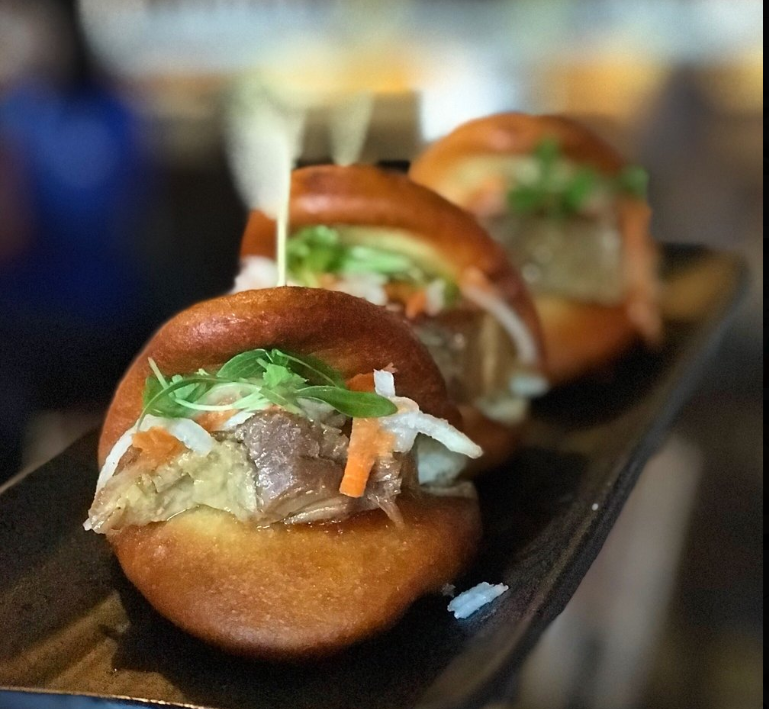 So I was actually staying at a hotel on the strip once. Yeah, yeah I know, this guide is about off-strip. But let me just finish the story. So I was staying at a hotel on the strip, and I was really hungry. I didn’t really want to go inside the hotel and eat anything, and I was craving Asian. So my buddy suggests District One Kitchen & Bar. He said they have amazing Pho (Vietnamese noodle soup, which I love), and other types of Asian fusion type dishes. But honestly, I didn’t feel like driving and was being kind of lazy. But it wasn’t that far from the strip, so I decided to go.

Man was that a great decision! I had some of the best shrimp pho I had ever had and my buddy could not stop drooling and licking the bowl of his ox tail pho. So if you’re ever in Vegas for longer than a day, or even 5-6 hours for that matter, I would definitely hit one of these three restaurants. Hell, if you there for just one day, I would hit one for breakfast, one for lunch, and one for dinner. After that, you will leave Vegas very happy, and well fed.

I know this might not be your typical review guide for Las Vegas, but you can best be sure of one thing. Every person or location mentioned in this article is truly the best of the best. I hope you found this article of value. Please be sure to give us your feedback or comment on any of these locations after you’ve gone. Thank you.

I know we said “For Locals”, but let’s face it. Anyone can use those gems. And since a lot of people actually drive to Vegas and stay for longer period of times (spring break, New Year’s, etc.) or you never know when you might need that mechanic or therapist.